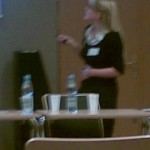 Me giving my talk today (see previous entry for abstract). Excuse the blurriness. The paper went well; I think it was fairly clear. It was noted that all my research subjects were very young: (21-26) and that their common views/experiences might have something to do with this. I might ask the same gang of people in fifty years whether their philosophy and views about the composer/audience relationship has changed at all…!

I was told it was comprehensive and it did provoke a lot of questions and discussion. I was pleased to find that a handful of the audience were Composers, and I had a good crowd of 16 or so; not bad seeing as I expected about 4! Memorable questions asked afterwards were: “Do you imagine yourself as an audience member while composing?” and “Do you think that we can be conditioned to experience clear emotions through atonal music?” The ’emotions’ thing becomes a little clichéd, but I defended the next speaker (Piotr Podlipniak) when he was attacked for his over-use of the term, in his research on ‘The universal aesthetic value of tonality and the ubiquity of tonal music‘ (already a provocative topic)! I made the point that for a lay audience, emotion is the first port of call in their attempt to encode what they hear (back to the ‘Constructivist theory’ about people not just passively receiving sensory input but being inclined to find meaning somehow). As children we often learn about classical music in this way; we identify major and minor keys by their potential to express certain ‘moods’. Speaking of moods, there was another talk on Tuesday about how we have to connect a mood to someone, or a legimate circumstance – so, a landscape can’t really be ‘gloomy’, but a painting of a landscape can be etc (Krzysztof Guczalski: Expressive meaning of music – a pioneer conception).

The main ‘discoveries’ in my research were:

A. The majority of composers suggested pre-concert talks or programme notes as a means of explaining to the audience what their music is about. This was interesting considering that a couple of the composers had elsewhere in the questionnaire insisted that the wider audience’s response was irrelevant to them. By insisting on these tools to translate their musical ideas, they are actively imposing a certain meaning on the piece for the audience, so therefore they must be at least a little concerned about how the audience hears the piece.

B. There was a divide in the mindset of some of the composers I questionned, between those who used the lay audience’s ‘ignorance’ as an inspiration to ‘write to challenge’ and those who decided that to acknowledge the audience as an important factor would inevitably hinder their development.

There were other little discoveries but I think those two were particularly important. I gave the audience a printed copy of some (anonymous) answers from the composers I used as research subjects.